With an unknown background, in the novel, we meet the dog owner and retired school teacher Janina Duszejko who lives in the Polish countryside. Neighbors are some various odd existences. And amongst such things as a creative and the engaged teaching of 10-years kids, she also help her former student "Dizzy" with the almost impossible task of translating William Blake's lyric into Polish. One of her peculiarities is her naming of things and people she meets - names she think fit better than their names and titles; but her own given name Janina, she would rather not use at all.

In this poetic criminal-ish story, a series of strange deaths occur. Without revealing the storyline, this down-to-earth vegan female figure is simultaneously astrologically psychic and is constantly observing nearly magic invisibly contemporary signs that no one don't even mind to reflect on, but guides her through stiff stuporous patriarchal and their despised denial, who think that she, more or less, is half-mad.

The William Blake text Proverbs of Hell in his book "The Marriage of Heaven and Hell" (1793) is a remarkable parallel in Olga Ts text: "In seed time learn, in harvest teach, in winter enjoy. Drive your cart and your plow over the bones of the dead. The road of excess leads to the palace of wisdom. Prudence is a rich ugly old maid courted by Incapacity. He who desires but acts not, breeds pestilence. The cut worm forgives the plow. Dip him in the river who loves water. A fool sees not the same tree that a wise man sees. He whose face gives no light, shall never become a star. Eternity is in love with the productions of time. The busy bee has no time for sorrow. The hours of folly are measur'd by the clock, but of wisdom: no clock can measure. All wholsom food is caught without a net or a trap. Bring out number weight & measure in a year of dearth. No bird soars too high, if he soars with his own wings. A dead body, revenges not injuries" (Blake).

This is an incredibly beautiful story. 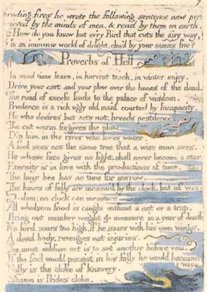