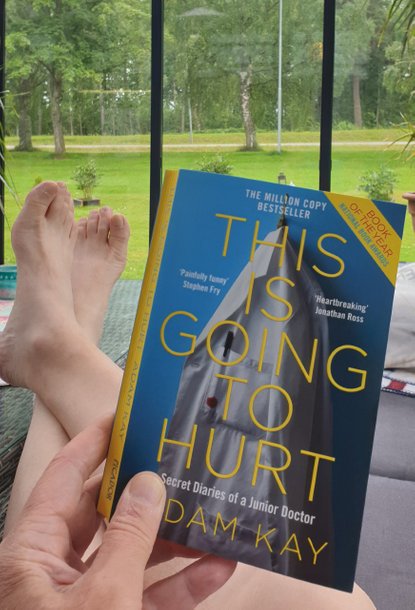 This Is Going To Hurt

- secret diaries of a junior doctor

Summerreading. I think it's possible to read this autobiography either as a fantastic piece of work, or a fucking disaster. The narrative is occasionally formal, occupational and technical, but at other times sensation-seeking and brute on the verge of being rude and unpolished. Is Adam Kay totally losing his ethical stance as a former medical doctor? Or is he just open-mindedly facing the bloody truth in a realistic and uncensored manner? Perhaps humorous, but the jargon is more mocking than fun.

But, the book is sometimes funny, really funny, and perhaps it could had been an interesting biography, but the text is more ironical than authentic. Adam Kay is tired to the bones of the institutional bureaucracy, poor working conditions, low wages, half-weird colleagues and hierarchies. In short he seems to be more fatigue, disappointed and disillusioned than honest. The narrative is mixed with tragic patient cases and their various ridiculous (?) manners, and their even more tragic misconceptions, their googling, their sometimes odd moral standards, their personal obscene wrongdoings. Some are really heartbreaking.

Adam Kay is perhaps trying to reveal the truth "behind the scene", but is he turning out to be sarcastic instead? There is no reason to believe that he wasn't a skilled doctor. And, or but, beside the distanced diaries of his, he seems to be both dedicated and committed: a nice friendly and concerned hardworking guy. His shortcomings makes him human in a beautiful way, and that's a really nice read. His freewheeling jargon is perhaps meant to be disarming and non-sexistic (and sometimes it is), but as in every collegiality at a pub night, together with friends, he is saying things only meant for a drunken ear and perhaps telling more shit than was needed....